Made in Germany – Made by Vielfalt

2. April 2019 | By Kerstin Wandt
Kienbaum is part of a Germany-wide promotional campaign by family-owned companies titled: “Made in Germany – Made by Diversity”. We are proud to take part in this campaign and to make this public commitment. But exactly what is it about? We posed a few questions concerning this to Fabian, our Chief Empowerment Officer:
Fabian, what is this campaign we are seeing this week on large billboards everywhere, and how did Kienbaum come to take part in it?
FK: The Made in Germany – Made by Diversity campaign came about through a coalition of 50 family-owned companies that share an awareness of their responsibility to society. We have taken a public stand in support of an open culture and the practice of diversity, and we disseminate these values through many outlets. Because we are all well connected through our network of family-run companies, I was involved in this wonderful idea at a very early point, and I am pleased that it has been so well received.
What does diversity mean for Kienbaum?
FK: As an entrepreneur, I would like to adopt a clear public stance, and I see the campaign as a good way to do this in the spirit of the Diversity Charter we signed in 2008. It is our aspiration to become the most compassionate consultancy firm in Europe – and so it goes without saying that we stand up for the practice of diversity in our open culture. We have many employees of diverse backgrounds in our company, and we take great pleasure from experiencing the values, traditions and influences of extremely varied belief systems. Of course, this attitude will not end when the campaign has been concluded – quite the opposite: Kienbaum will always stand in opposition to discrimination and xenophobia!

Why is now the right time to conduct such a campaign?


FK: There is a good reason why the campaign is named Made in Germany and not Made by Germans. In other words, this means that the Made in Germany quality rises and falls with those who invest their energy and enthusiasm in their work. And these people can come from anywhere, not just from Germany itself. Especially in the run-up to the European elections, I believe it is extremely important to speak out loudly and clearly in favor of the openness and tolerance Europe offers as a place to work and live. A commitment to diversity is fundamental and diversity becomes the all-determining basis . It would be very difficult to achieve development without it. 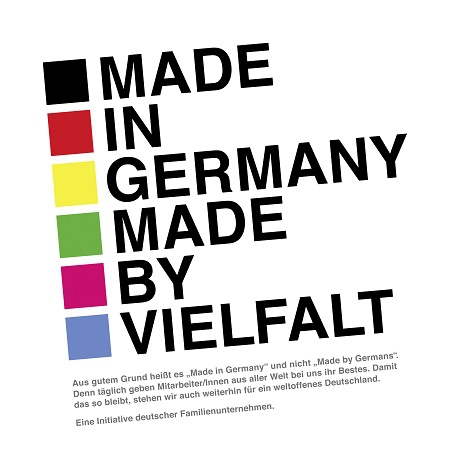