After more than six years since the introduction of Premier Minister Shinzo Abe’s economic reform package “Abenomics” and with the Olympic Games in Tokio coming up, it is time to take a closer look at the 6,852 islands encompassing East Asian state of Japan. As the world’s third largest market and one of the global leaders in technology, re…

After more than six years since the introduction of Premier Minister Shinzo Abe’s economic reform package “Abenomics” and with the Olympic Games in Tokio coming up, it is time to take a closer look at the 6,852 islands encompassing East Asian state of Japan. As the world’s third largest market and one of the global leaders in technology, research and development, Japan is an attractive location for numerous foreign businesses. However, finding appropriate human resources is a challenge for countless international companies in Japan that can only be mastered when keeping the specifics of Japan’s economy and labor market in mind.

The evaluation of “Abenomics” varies depending on the underlying political and economic perspective. From the viewpoint of Abe’s supporters, excessive Yen appreciation has been corrected by monetary easing and flexible fiscal policy, which resulted in improved profitability for companies and thus higher stock prices. The most recent unemployment rate went down to 2.4 percent (May 2019, Ministry of Health, Labor and Welfare), which is the lowest unemployment rate in the past 26 years.

The Opposition, on the other hand, claims that the increase in fiscal spending has worsened the fiscal deficit and that the unemployment rate’s decline is an extension of the positive trend following the financial crisis, a trend that has continued since the inception of the Abe administration. Overall, keeping both points of view in mind, the general opinion is that despite some negative aspects, the current administration, which has gained a solid level of public support, contributed to the current relatively favorable economic situation.

As far as the future of the Japanese economy is concerned, the Olympic effect, which is expected to add 0.2 percent to next year’s GDP, will be of short-term importance. In the long run, the key to sustainable economic development will be how innovative technologies such as AI, big data and robots can be integrated into the economy. In order to realize this, “Open Innovation” – the development of new products, services and technologies beyond the borders of one single company – will be the driver of success. Since innovation increasingly requires a complex combination of various skillsets and ingredients, the capabilities of one single organization are quickly exceeded.

Last but not least, Japan has been suffering from significant deflation in recent years. Necessary for the lasting development of the Japanese economy, along with the above, will be the willingness of Japanese companies to invest and Japanese consumers to spend.

It is notable that “securing appropriate human resources” is scoring more than twice as high as any other factors due to the current highly job-seeker-friendly labor market. Foreign subsidiaries are generally smaller in size than domestic companies, making it difficult for them to offer similar career development programs. In addition, English proficiency – normally a prerequisite for a position at a foreign company – narrows the potential candidate pool further down: Japan is 49th on The English Proficiency Index (EF EPI) and therefore behind many other Asian countries.

In addition, we often hear from our foreign company clients about the difficulty to reach the “high quality requirements” of Japanese customers. Foreign-affiliated companies that do not have R&D or manufacturing departments in Japan will therefore spend a great deal of effort in engaging with the engineering and manufacturing departments in their home countries in order to make them understand the special circumstances of Japan. Confronted with such a situation, foreign companies are often hesitant to satisfy these requirements by investing extra costs and/or time. As a result, business opportunities may be missed. Hence, making the headquarters understand the uniqueness of the Japanese market in order to satisfy the special requirements of local customers is a key factor for success.

Specifics of the Japanese labor market

One of the specifics of Japan’s labor market is the decreasing workforce: The latest effective job offer ratio was 1.61, which is the highest job offer ratio since February 1974. The influence of the recent economic expansion is one of the reasons. Another one is that the so-called “baby boomer generation”, born in Japan from 1947 to 1949, has by now retired from the labor market. In addition, the generation which graduated from university in the 1990s had difficulties to enter the job market because of the economic crisis. Many of them are now forced to work on a part-time basis with limited career opportunities. All of these elements contribute to a significant shortage in the working population which will further aggravate, making it difficult to secure appropriate human talent.

A second factor to consider is the declining birthrate and aging population. According to a White Paper published by the Japanese Government last year, 26.7 percent of Japanese are older than 65, giving Japan the highest ratio of the population older than 65 years to the overall population among major countries. Naturally, this causes a serious impact on the labor market. For example, foreign-affiliated companies often request recruitment of middle managers with prior managerial experience up to their 40s. This age group though has little motivation to change jobs as they still see career development opportunities in their current companies. As a recruiter, we would recommend to target an even more senior generation, i.e. managers in their late 50s, who are facing a so-called “executive-age limit” and cannot expect any further internal career development opportunities.

Furthermore, the current status of Japan’s female workforce is lagging behind other developed countries. The labor-force participation ratio for women in Japan drops significantly between their late 20s and early 30s, caused by marriage, childbirth and childcare. Even though the subsequent “return to employment rate” has been increasing, it is still lower than in the West. This makes it difficult for women to advance to managerial positions. Incidentally, the ratio of women in managerial positions in Japan is 11.1 percent (ILO data), which is only 1/3 of that in Europe and America. In the future, presuming that the necessary infrastructure such as daycare centers is in place, we hope that it will become easier for women to resume working after childbirth, which will then hopefully generate more opportunities for women to be promoted to managerial and executive levels.

Last but not least, the share of foreign residents is extremely low in Japan compared to e.g. European countries: As of June 2019, only 2.64 million foreign residents were registered (Ministry of Justice). In addition to the geographical barriers of an island nation, the Japanese society is characterized by very high conformity pressure, which, in itself, seems to be an invisible barrier to integrate foreigners. Although the situation cannot be changed instantly, taking the current employment situation into consideration, it should be an option for companies to promote the recruitment of foreigners. 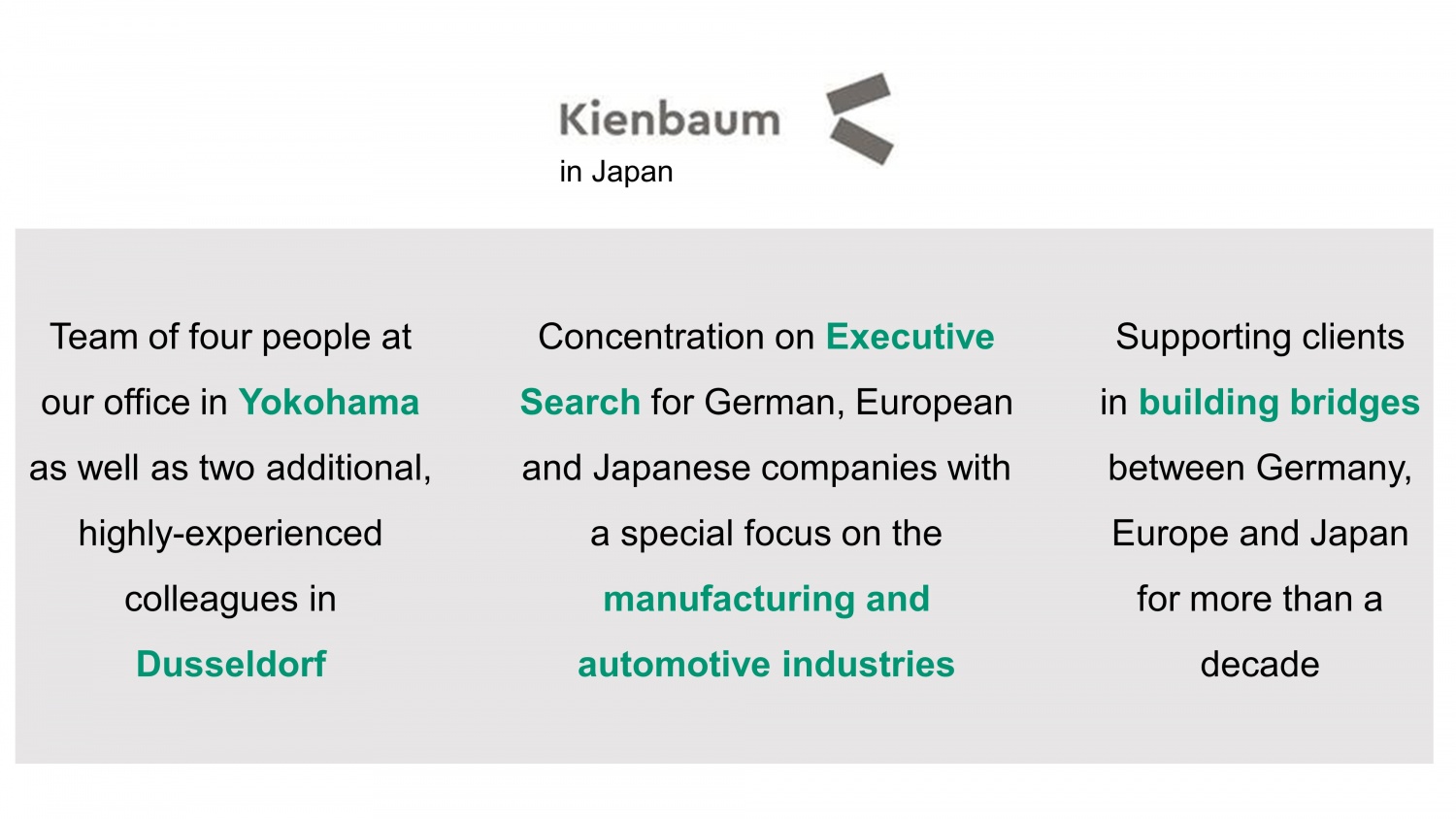